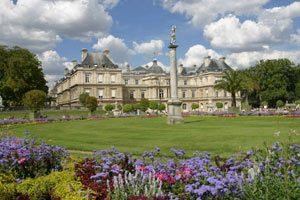 After the digression of the Second Republic (1848-1851), the Luxembourg renewed its parliamentary tradition. For the grand solemnities of a vast and richly ornamented hall, Napoleon III intended the Senate of the Second Empire. The former Chamber of Sessions of the House of Lords and the adjoining rooms were then converted into a single gallery for solemnities, taking the name of the "Galerie du Trône" [Throne Gallery].

This brilliant period ended with the collapse of the Empire (1870). The Luxembourg again went through tragic times: a council of war sat there, members of the Commune were judged and the sentence was carried out in the gardens. Later, after the fire at the Hôtel de Ville, it was the prefecture of the Seine that was installed in the Palace, a tenancy to end with the Third Republic and the assignment of the Luxembourg to the Senate (1879). The Palace of Luxembourg then became once again the pinnacle of power. The illustrious politicians who sat on the benches of the Senate, Victor Hugo, Jules Ferry, Joseph Caillaux, Georges Clemenceau, Raymond Poincaré were no longer to be counted... Occupied during the Second World War by the General Staff of the Luftwaffe-West, the Palace was to be liberated on 25 August 1944, and house, in turn, the Provisional Consultative Assembly, the High Court of Justice and the Peace Conference before, once again, in December 1946, finding its "parliamentary vocation". Yesterday, the Council of the Republic, today, the Senate of the Vth Republic sits there.

The present Senate has been able to adapt the palace to the needs of a modern political assembly, while scrupulously respecting this exceptional treasure of Parisian architecture. It looks after the Petit Luxembourg with as much care. The latter now consists of two main buildings; the older one looks out onto one side of the Jardin de la Reine [the Queen's Garden], and the other one onto the rue de Vaugirard, the most modern being the residence of the President of the Senate. Acquired by the regent, the former residence of François de Luxembourg, built in an open "U" shape on the rue de Vaugirard, surrounded by a plot enlarged to receive the Congregation of the Daughters of Calvary, was given in 1627 to Richelieu, who made a gift of it to his niece, the duchesse d'Aiguillon (1639). Then the "Grande Condé" became its owner. His daughter-in-law, Anne de Bavière, having decided to enlarge and redecorate the mansion; she turned to the architect, Boffrand, who, between 1710 and 1713, doubled the surface area thereby giving it the appearance it retains to this day. Accessible from a majestic staircase, the Salons de Boffrand, whose windows open out onto the box-edging flower beds of the Jardin de la Reine, have preserved their décor still intact. It is in the other main building, built by Boffrand, that the Presidents of the Upper Chamber have resided since 1825. For almost forty years, they have been busy restoring their residence, in particular, the Chapel Royal, and maintaining the winter garden, a link between the Petit Luxembourg and the "most beautiful garden in the world"...